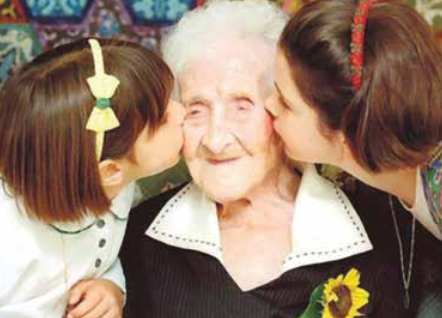 You love them, but you are squirming, looking for polite reasons to leave. You’d never want your favorite older relatives to know that visits to their house can be torture because of the old people smell that seems to be permeating everything, and maybe even your own clothes.

They may be meticulous housekeepers. They may shower daily. But there’s something a little funky going on. Some people describe the odor as greasy, some call it grassy. In stale beer, it’s associated with a cardboard taste. And yes, it is a real thing.

Though if you want to be polite, “old people smell” is not the best way to put it. The correct term is “nonenal.”  It’s caused by the chemical 2-nonenal, an unsaturated aldehyde that is associated with the smells of cucumber, orris root, fat… and aging.

The human nose isn’t as sensitive as a dog’s, but it knows more than we usually give it credit for. Including how old other humans are.

At Monell Chemical Sense Center in Philadelphia, a team of researchers gave 41 participants swatches of body odor to smell and evaluate. The smellers ranged from 20 to 30 years old. Samples came from people age 26 to 75. The smellers could immediately identify which samples came from older donors.

The slightly scary thing about nonenal is that none of the old people you know probably have any idea they smell old. Which means, YOU might not know it if it happens to you. In fact, in the Monell experiment, smellers noted the nonenal smell in samples from people at age 40 and up.

The source of the smell is the breakdown of omega-7 unsaturated fatty acids on our skin. Around age 40, the antioxidants that inhibit this process become less efficient. Hormonal changes increase the rate of omega-7s on the skin as well. Menopause is regularly cited as one factor. And while no scientist has yet said that andropause has the same outcome, they have noted that the nonenal smell is strongest in middle-aged men.

The first scientific study of the problem occurred in Japan in 2000. Researchers asked 22 people ranging from age 26 to 75 to shower and put on an odor-collecting shirt before bedtime every night. During the day, each shirt was stored in an airtight container. Participants wore the same shirt for three nights in a row, then numerous chemicals they emitted were analyzed. The one that varied significantly between the young (with none) and the old was 2-nonenal.

Now that you know about this scent, what can you do?

One Japanese company, Mirai, has an answer. It makes soaps, body washes, and body serums that it says will remove the nonenal smell. The miracle ingredients purported to do that are persimmon and green tea. The serum includes astaxanthin.

Remember that your favorite old-smelling people aren’t dirty. They shower and keep a clean home. So can you really wash the nonenal smell away with a special soap? People who have tried it say they believe it works.  The products are certainly no more expensive than any premium soap and body wash. Which is to say that a bar of Mirai soap is only about 20 times as expensive as a bar of Ivory, but only half as much as Hermes.

If you’re not up for that, there’s this thought to remember. Researchers who collect nonenal for tests zero in on the nape of the neck, where your body emits the most. So you might want to scrub twice behind the ears.