The Lowest-Cal Healthy Fat You Should Start Using 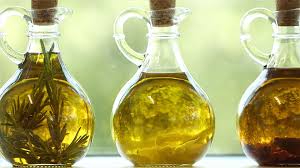 American health and diet trends pay a lot of attention to fat. Just eliminate it and all will be well, Ornish-followers promise. Eat a lot of it and don’t worry, Atkins advocates counter. Don’t eat butter. Do eat butter…

This past week at Renown Health, we caught up with the latest research and findings on fat and oils in the diet.

The first thing to note is that whatever form they come in, fats add calories quickly. But one of them is surprisingly low…

Under 120 calories… This is going to upset some notions. Lard will save you a few calories at 117 per tablespoon. Butter does even better, at 108 calories per tablespoon. Ghee, which is a form of clarified butter, is approximately 112 calories. Please note, however, that this can vary by brand. Most are 110-120 calories, but a few hit the 130 mark, so check labels. If you are lactose intolerant, you should get to know this butter-flavored fat because ghee has practically no lactose. The milk solids settle out and the lactose disappears with them. To continue the lower-fat group, mayonnaise has 94 calories and there are real calorie saving in the butter substitute, I Can’t Believe It’s Not Butter, which is only 50 calories.

By-products from frying and high heat are another matter. Cooking with oils at high heat causes acrylamides to form, especially when the food being fried is a potato. Acrylamide is a known carcinogen and best avoided.

The acrylamides come from the food, not the oil itself, but some oils seem to foster higher levels. The interesting thing about this food threat is that saturated fats are less unhealthy on this score than unsaturated fats. For instance, scientists who fried foods and measured the results found 366ng (nanograms) of acrylamides per gram in lard. Even lower, ghee had 211ng/g. Those levels are a fraction of the 2447ng/g in soy oil and 1442ng/g in palm oil after frying vegetables.

Thumbs up for olive oil.  Few things are completely bad, and oils have benefits, too. Olive oil has had years of praise claiming it lowered cholesterol, improved your skin, managed diabetes, lowered blood pressure, reduced tension and turned you into a sexy Latin lover, just like that. Some had a bit of truth to them, and some were overblown.

Now there’s olive oil backlash. Most troubling is the ugly fact that olive oil might not be the real thing. There’s a big problem with counterfeiting. Also, some of the olive oil at your grocery store is old, and the benefits are lost or weakened.

There are whole “medical” or “health” websites that pound the table over olive oil’s terrible consequences. Naturally, these places tend to have systems and special food plans that will gladly sell you. As we’ll see, olive oil still rates a solid round of applause.

We’ll strive for the truthful moderation of the mid-ground as proved by science.

Research that was just published in January 2018 in the journal with the intimidating name “Endocrine, Metabolic, and Immune Disorders Drug Targets,” gives olive oil high marks. To quote its summary: “The studies analyzed demonstrated the role of EVOO as an anti-inflammatory, antioxidant and vasodilatory nutrient that may contribute to lower the atherosclerotic burden.”

That makes slightly olive oil a health winner among oils, although it does add a few more calories.

To be sure you are getting real olive oil, it’s a good idea to avoid “light” versions in most brands. You can also look for certification from the California Olive Oil Council (COOC) and the North American Olive Oil Association (NAOOA) for domestic olive oil. For international brands a certification from the Extra Virgin Alliance (EVA) the Italian growers association UNAPROL and the International Olive Council. UNAPROL is an Italian olive growers association and the brands it certifies will be labeled 100% Quality Italiana.

Ghee has advantages you should know. We’ve already established that ghee is somewhat lower in calories. But it’s also high in saturated fats, slightly more so than butter.

Ayurvedic medicine claims that ghee is good for the whole body, reduces inflammation, and promotes flexibility, intelligence, memory, better digestion and the quality of semen.

Research on ghee is still sparse. Some recent work done in rats looks good for ghee, but most research on humans has been in tests that were not randomized, placebo-controlled, or blinded. In those, the findings were promising, but the research design wasn’t high quality.

In 2018, researchers in India went house to house to find 2008 study participants and then divided them into three groups based on whether they ate more mustard oil and less ghee, about the same of each, or more ghee and little mustard oil. The mostly ghee group came in with lower triglycerides, lower cholesterol, lower low-density cholesterol, and higher high density (good) cholesterol. It’s not conclusive given the lack of randomization and blinding, but the data covered enough people to be convincing. Plus, another study in 2010 showed similar results comparing people who ate more ghee. The more ghee group had better cholesterol levels and less coronary heart disease (CHD). Researchers suggested that the rise in CHD in urban Indians might be related to a switch away from cow ghee (made from butter) toward vegetable ghees which have higher levels of trans fats.

The reason these benefits could well hold up under closer scientific scrutiny is that, when made with milk from grass-fed cows, ghee is very rich in vitamin A, D, E, and K. It is also a good source of butyrate, an acid that decreases inflammation and seems to improve insulin sensitivity.

Plus it has a high smoke point when sauteing food. It creates fewer acrylamides than any other oil. And it tastes really good on popcorn.

So a little ghee could save you some calories and do you some good.  If you decided to buy it at the grocery store, be sure it is made from butter, not vegetable oils.